In motorbike rented by the North American West 4

Course to the national parks 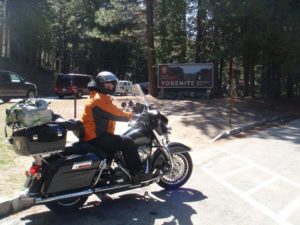 In the morning, Saturday dawned bright. After a good breakfast, we headed to Yosemite National Park, the first point of interest on the route. The nighttime obsession of the previous day for finding Route 4 makes us start with the autopilot on. After a couple of towns and a few kilometers we realized that the correct route to follow from Angels Camp was 49. Back. Anyway, we did not miss the extra “excursion” since the landscape is picturesque. Deep North America.

Today we look more at the traffic and we notice the amount of pick-ups (huge) with which we cross: they are more numerous than cars. In addition, they are personalized in all possible ways: there are high, some very high, others very low, with all kinds of boxes, utensils and trailers. It’s a different culture than what we’re used to.

It is a rural environment traced to any movie or television series: here you realize the little imagination of Hollywood screenwriters and film directors !. We return to Route 49 in the direction of Yosemite. The road begins to rise steadily and the landscape is changing: increasingly mountainous and with trees that seemed large (we had not yet discovered the redwoods). The day is still sunny although the temperature is low. The cold will be a constant during the trip, more than expected. 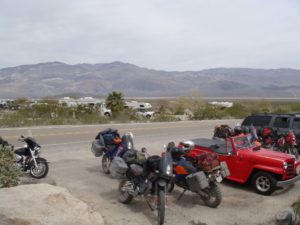 We found few motorcycles on the route, which are distributed to more or less equal parts between BMW’s and Harleys. We started to see some snow on the side of the road. Soon, snow is plentiful on both sides of the road although the asphalt is impeccably clean. On the way to Yosemite we have stopped a couple of times to drink hot coffees, and people are always open, friendly and inquisitive.

When the park entrance arrives, it confirms what Wolfgang (dubbelyu) had explained to us: the legendary mountain pass Tioga Pass is closed during the winter. The snow plows do not enter to clean the road until the beginning of May. Stone walls and waterfalls accompany us for a good number of kilometers in a beautiful path that goes along a river on both banks.

The Visitor Center of the Park is very large with numerous shops, information offices, hotels and several camps. All built with grace and respect for the environment. There is a small space to park motorcycles in which almost all motorcycles are Harleys. There are free buses that go through the points of interest from which the hiking tours begin. It’s a shame: we could be a week or more without leaving the park and we will hardly have a few hours.

We chose a small excursion to the nearby Mirror Lake, which was a nice walk. It is a lake with calm waters that reflect the mountain like a mirror. In total, a couple of hours walking. A little trick for traveling on motorbikes and walking, is to use some mountaineering boots instead of motorcycle boots that you can not walk with. It is about finding a certain degree of commitment that allows comfort in the various facets of the trip. 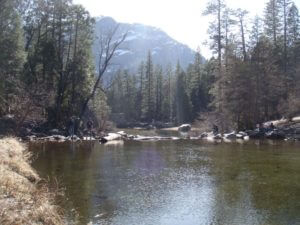 In the Yosemite National Park there were many people visiting the Park, although at no time there is a feeling of overwhelm. It has a huge extension and is well mounted. Unlike the Spanish parks, you pay an entrance fee of 20 dollars per vehicle, but there are some services that justify it.

It was three o’clock in the afternoon when we decided to leave the center of Yosemite National Park in anticipation that we would be touched to find the place to sleep outside the Park. It was Saturday, and not just any Saturday: the beginning of Holy Week. Obviously, there was not a hotel available in the Park and even the numerous campsites were full of motorhomes of all kinds. 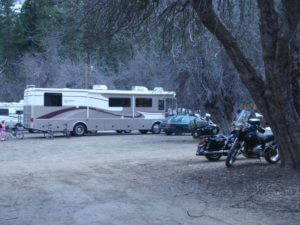 The route to leave the Park, heading south on Highway 41, was as attractive as the entrance. The road has a lot of curves and a steep slope, but it is very wide and the curves have a great radius so the Harley drives well. About to leave the Park we arrived at Wawona where there was a beautiful hotel. From a postcard It was already late enough to think about staying, and a surprising “Vacancy” sign made us consider breaking the bank on the second day to stay there. When I went to the counter to ask if they had a room and they looked at me as if I were an alien, I realized that we were not going to sleep there. “Vacancy? No, It’s a mistake. ” Deep down, luckily they had no room: 300 dollars for one night would have broken our budget for the rest of the trip.

We continue the route and after a few more kilometers of low We arrived at Oakhurst, the first town outside the Park boundaries. It turned out to be full of motels and I made another book error: wasting the last hour of daylight by traveling a dozen motels with similar prices, similar rooms, cloned receptions and mimetic facilities. In short, having stayed in one of the first two or three would have been enough. Lesson learned for the rest of the trip. The only good thing about this particular route of the motels was to have located a fish restaurant that looked familiar and pleasant. There was not much to visit in Oakhurst.

While we were waiting for the dishes to be brought to us, there was a little game on the table where you had to fish little fish magnetized with a straw. As two children, we had a good time playing. Only a couple of days ago we were traveling and we already had that feeling of absence that travel gives away. Every day, a different site. Every day, many landscapes. Every day, many experiences. Every day, a new world. Rupture with