In motorcycle rented by the North American West 12

In the mythology of Route 66 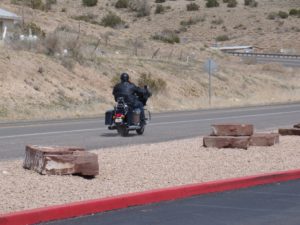 The following day, on Saturday, we return to Route 66, It goes meandering with Highway 40. Now on the right, now on the left. Every time the road moves away from the highway, we are in the middle of the desert, but always accompanied by the train track. 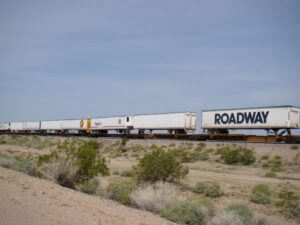 During the day we are permanently accompanied by the train, which has an incredible long traffic (but really very long, I would bet that they go from the kilometer …) freight trains that happen with a great frequency: they amortize well the way these Americans. In addition, the trains load the containers of merchandise of two in two and are thrown by convoys of four or five tractors. Uauh !, trains are really spectacular, although I do not know what I’m surprised: they are XXXXL size, like almost everything in this country.

We stopped at a petrol station to refuel that was literally in the middle of nowhere. In fact, before and after, many abandoned gas stations and motels were found. This is the only one that works for many miles around and they have it very clear. Next to the box, at the time of payment, there is a little sign that says something similar (even more radical in the language): “We already know that gasoline is expensive here. You are free to buy it or not, but do not complain to our employees. You can imagine what it costs to keep this gas station running in the middle of the desert. Enjoy it or leave, but do not complain. ”

After passing Ludlow, Route 66 runs parallel to the view of Highway 40. With the difference that the asphalt of 66 is completely degraded and bumpy. The truth is that I felt a bit stupid bouncing with the Harley next to a beautiful highway. Anyway, everything is for the authenticity of the trip …

We practically spent the rest of the day following Route 66, alternating on both sides of Highway 40. The remains of Route 66 are more or less parallel to the highway, but with a much worse asphalt quality. Many times the idea of ​​forgetting about the game of following the most authentic route possible and jumping on the highway went around us. But in addition to the degraded asphalt, the lower speed on the road gave us many details that escape from the fast highway. Gas stations and abandoned motels. Remains of a road that was the main way to cross this huge country, and which is now part of history and memory. I am sure that in a few years, with the love they have for these lands for the memorials and for their own history, route 66 will be recovered and well signposted.

A few miles later we arrive at one of the most charming spots in this route. This is the roadside bar where the sweet film Bagdad Café was filmed, a recent movie success. At that time the bar had another name, but the fame of the film and its location on Route 66 made it a place of worship and changed the name. Overall, everyone already knew them as the Baghdad Café bar.

The bar is well preserved. It has flavour. A lot of flavor It is full of visitors’ notes on the walls, and the worn covers of the chairs suggest a lot of history. When we arrived, it was very quiet and we decided to take the opportunity to eat a salad and a hamburger. In the middle of the bar there is an old music machine of those that work with coins. I searched for Calling You, the mythical song of the film’s soundtrack. It was easy to find since it was the most worn key of the whole machine. I put some coins to sound several times, creating a very special atmosphere that transported us inside the film itself: its slow cadence, the sensations, the decadent atmosphere …

Suddenly, the bar was full of tourists descended from a coach. The enchantment died and he left go by legs back to the Harley and the road. Outside, the heat of the desert beat very well. But we breathed better the fresh air outside than the environment transgressed by the tourists unloaded to weight.

I am fascinated by the Airstream. They are those suggestive aluminum caravans that we see in the movies. They look like spaceships. These are caravans that are very popular in the United States, and can be seen with some assiduity. In the area of ​​Death Valley we had already met a few, always shining. But in the desert we found many that had lost their shine and were used as a home. Literally, many times they were in the middle of nowhere. There were also some abandoned or that were used as warehouses that cried out for a restoration.

The route to Dagget was straight. And I promise you that here the straight expression has a different meaning to the one we usually know. Infinite lines: kilometers and kilometers of desert without a small curve that breaks the routine. And without crossing with any other vehicle. You end up getting used to this type of driving, in which the head turns around to anything else while the time passes at a sustained speed.

From time to time, motels or bars appear with all the flavor of Route 66. They remind us where we’re. On this occasion, there was a police car taken from any movie from the fifties or sixties.

When there were only a few miles to go to Barstow, we found the signaling of a detour. Closed road. The posters warn that a bridge is missing a few miles ahead and we have to deviate. In this universe of parallel and perpendicular roads, the detour is summarized by looking for a parallel road a few more miles to the right. But it was not easy to return to the original route since a military base crosses the road and touches it.

Finally, we reach Barstow. Unlike Williams, Seligman or Kingman, at no time did I find the point of interest in this city. Road up and down the road a couple of times without finding anything worthwhile.

Interestingly, in Barstow we found many obese people. It’s one of the things that surprises me every time I go to the United States. The obesity. It’s huge. Being an obese person there is something more dramatic than in our environment. Another scale I think it’s a kind of new epidemic of the 21st century. And I always return from those lands with the firm intention of dieting and recovering my ideal weight before it is too late.

As Barstow we had not liked too much, we looked for the motel to sleep outside the city. We found it near Calico, on the same road next to a huge classic American restaurant with five different atmospheres. Place of truck drivers, with a lot of atmosphere and good food. Good end to a long day. 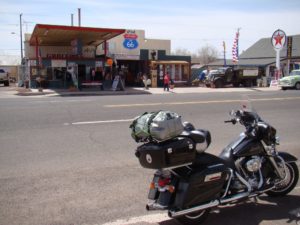 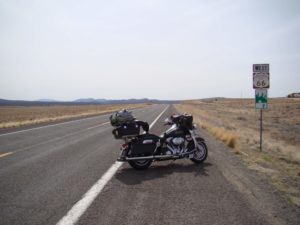