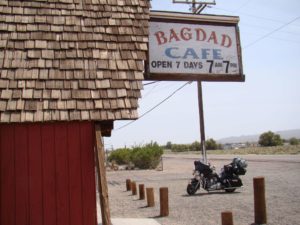 After the disappointment of Barstow, when we got up on Sunday we had to make the plans of the last stage of route 66. In the maps it was easily appreciated that try to follow this last section in the network of highways and highways that are arriving Los Angeles was going to be especially difficult, and from what we read, it was not especially rewarding either. In fact, some of the maps of route 66 already sent you directly by the highway in that section.

In addition, at this point the calendar was already very tight. In Los Angeles we could stop a single night, taking advantage of to walk what we could steal that afternoon and a while the next morning. Little time for a huge city full of hidden corners. In the end, we decided to take the most direct route to the city, leaving us to decide during the morning if we entered the highway or decided to cross the mountains that could be seen on the map next to Los Angeles.

Crossing Barstow in the morning , we decided to give the town one last chance to show us its charms. We make a brief visit to the old station, where we find some large locomotives and a small closed museum on Route 66 in California. In the early hours of Sunday it is just a sleeping city that touches our noses with useless traffic lights, making us stop so that no one crosses the street. Definitely, we will look for route 15 in the direction of Los Angeles-San Diego.

Victorville welcomes us with a huge sign announcing its status as a historic city on Route 66, signaling the start of “Old Town Route 66”. But despite the sign, there are few traces of the route in the city. The day It had dawned cold and we had stopped a couple of times to wrap up a little more. The day had dawned gray, cold, cloudy and very windy (again the happy wind …). Unexpected way to approach the “Californian way of life”.

Looking for a bar to have a hot coffee we found one of those 50s style burgers that made us so graceful at the beginning of the trip. But already they begin to be a repeated landscape and a tired way of feeding. It was barely more than nine o’clock in the morning and people were eating real meat pies, mashed potatoes, a few eggs and some soups that were used for bathing. “Only a coffee with milk, please”, and they looked at us with the face of not understanding that we did not ask for food. You have to see how they come to eat in these lands!

After breakfast we meet a group of Harleys on their Sunday walk who greet us effusively. They are not so different from us: on Sunday they get on their bikes and go for a group ride. Of course, with all the Harley paraphernalia (what I find most curious are the covers of leather pants that practically all carry) and circulating scrupulously in a single lane of circulation. In total, there are more than thirty bikes that pass, with samples of all the models in the range including a couple of trikes.

From Victorville you could see the snowy mountains and some announcements of roads cut by snow. We return to route 15, which will have to be followed until we can take the 10 that goes directly into the city. In addition, in most of this section the 66 coincides with the same plot.

Despite being Sunday morning (or perhaps precisely because of that), the traffic towards the coast is intense. There are no traffic jams, but all the vehicles circulate at a constant speed in all lanes of the highway: there is practically no fast or slow lane. But the most impressive is a few miles ahead.

The highway has a long and steep slope. Intense traffic in its four or five lanes (according to the piece), a strong descent and buffeted by the wind that blew again with force. Quite an experience driving the heavy Harley on that highway. It reminded me of the highway in constant descent between La Laguna and Santa Cruz de Tenerife, but instead of 10 kilometers for a long, long time.

As we get closer to Los Angeles, the density of traffic still increases more. I was a little tense, warned by the many stories I had heard about getting lost in the Los Angeles freeway network. But the first contact was very positive and we easily found the detour to Route 10. When we were already supposed to be driving inside the city, we were surprised by a sign announcing 39 miles to Pasadena, where we had the motel booked. The distances within the city itself are huge and much of the day is spent going from one place to another.

Without too many complications we found our motel in Pasadena. On paper, it seemed like a good idea to stay in a quiet and relatively central location. But that idea was only good on paper: with such great distances, what we got was to be far from everywhere. Fortunately, we were only one night in Los Angeles. Quickly, we unloaded our luggage and went to discover the city.

On the parallel street we found signs that indicated route 66 inside Los Angeles. They are very cute signs on top of the posts, but they give orientations when arriving at the crosses. We follow the orientation and we cross a few neighborhoods of the city. As soon as you find posters in Asian characters as well as in Spanish, although it is clearly distinguishable when we are in “good” Anglo-Saxon zones.

We got excited like children when we saw the Hollywood sign on the top of the mountain. The power of cinema is enormous: the city is not a stranger. As before in New York and San Francisco, when you first stepped into Los Angeles, the feeling is of being in a place you’ve been before.

However, my personal universe of the city of Los Angeles I owe to the detective novels Harry Bosch (created by Michael Connelly) and I’m surprised with the names and places that appear in his novels. We travel on the West Hollywood motorcycle, Hollywood, the walk of the stars, Beverly Hills and the hills of Mulholland Drive.

Again we agree with the signs of Route 66 and decided to go to Santa Monica, to meet the Pacific Ocean and the end from Route 66. Crossing the neighborhoods without using the highways becomes very heavy. The distances are very long and it seems that we will not be able to reach the sea before it gets dark. 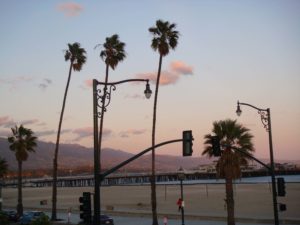 Finally, we come to the sign that marks the end of Route 66 when we reach the ocean. The view of the beach and the port of Santa Monica is relaxing. It is a very nice place. The Mint We have not booked the hotel in this area.

We parked the motorcycle again and strolled for a while. We are at an Apple Store. The previous day the iPad had been launched in the United States, so I had doubts if they had stock of it. “Do you have iPads?” “How many do you want?” And that’s how I got my Ipad the day after its launch. In fact, it was something like the reward for finishing route 66: What is not a bad excuse?

After a delicious dinner in a Japanese restaurant (no more meat for a few days, please …) we decided to go back at night to Pasadena. When we looked at the map we became aware that we were quite far away. It had already become clear to us that it was necessary to use the interior freeways of Los Angeles. To fix it, it started to rain. What a journey !. Lanes that appeared and disappeared, variable density of traffic with jams included, crossings and crossings of highways where you had to hit, the rain that did not let see anything … Endless journey. I arrived exhausted to the hotel of the tension of the conduction.

But the truth is that in spite of everything, I had loved to discover Los Angeles. 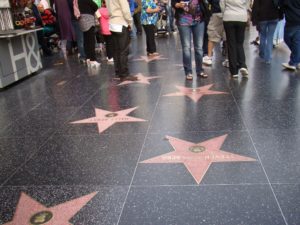