Among the giant trees 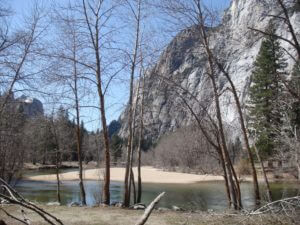 We try to leave early to make the link quickly until we reach the next two National Parks, King’s Canyon & Sequoia National Park. The curiosity is that there are two Parks that are managed as one. Two for the price of one (literally). To get to the park you had to follow the course to the south first, to surround the city of Fresno (you do not have to enter the city) and to head east towards the mountains. When surrounding the urban areas is when I feared not having taken a GPS during the trip.

But the first day we saw that we did not clarify too badly with the maps. When not carrying GPS it was necessary to be more attentive to the directions, the roads and the orientations. We rely on the classic system of paper maps, zeal and phosphorite markers. And it was not bad for us, really. In the end, I think the maps also helped us to enjoy the trip more.

The route had no major problems and we practically went all the way to King’s Canyon Park. As soon as we left Fresno, we began to climb the mountains again. Again the snow appeared, which on this occasion was more abundant. There was a lot of snow on the margins and in the mountains, but like the day before, the road was impeccable. For many miles we traveled between real snow walls on both sides of the road. 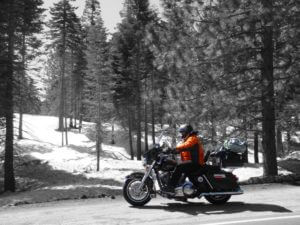 When we arrived at the Park Visitor Center, the first thing we did was to look for a necessary coffee with warm milk to recover the temperature. And we thought we were going hot on this trip. We had not taken too many warm clothes and the result was that we looked like onions with all the clothes on. To find the positive side to everything, to bring so much clothes on, was much faster to pack and close the bags.

It happened again that the road that crossed the Park was closed until early May, when they enter the snow plows to open step. Unlike Yosemite, in these two Parks the main route is made directly in the private vehicle. The interesting places to see (basically giant trees and picturesque landscapes) are located at the foot of the road. Unless you intend to get lost making walking routes through the interior of the Park, the main route is a good approximation to the Park.

The enormous redwoods of King’s Canyon are spectacular, a landscape that you have never seen before. The volumes that these millenary trees have are enormous. In the photos you have to look at the references to realize the dimensions of redwoods: people, cars, motorbikes … everything looks small !. The route traveled throughout the day was a marvel, circulating along a road that was quite an evocation to the imagination: feeling dwarfs in a lively forest. The feeling of driving the Harley through those forests was very special.

The last visit to the park was for General Sherman. The main redwood trees have their own name. General Sherman is a gigantic sequoia: the one with the most volume of wood and the heaviest weight. Its perimeter is 31 meters, and the diameter is 11 meters (it is not a perfect circumference). Nearly, it is not the tallest redwood although it measures the not inconsiderable figure of 84 meters (the highest one about ten meters more). Nor is it the oldest, although it has a whopping 2,300 years. More than any er monument of which we are accustomed to visit. It makes you feel very small. 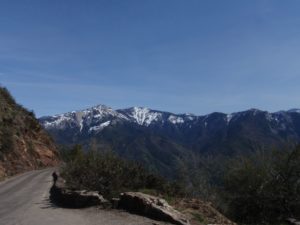 Despite the cold we went through, being able to see these snow-covered forests was a luck. A landscape of those that stays in the retina and the memory. Sunday was being intense. After the visit to the giant General Sherman, the road leads to the exit of Sequoia National Park. The road winds between forests and mountains and begins to descend. Despite being on a weekend and during the holiday period, traffic is not excessive. What there is is a large proportion of motor homes and motor homes of all kinds. Many are the size of a bus with deployable side walls when they are being used as a home. They are really great. There are also many pick-ups that carry the house in the box and, at least, with the classic caravan towed.

The Americans when they go on vacation do it fully equipped. Many motorhomes were towing behind a car or a 4 × 4 by the time they reached their destination. When I saw the first ones I was amazed. Then, I got used to seeing them. I remember a motorhome that had towed a pick-up with three bikes in the box, a boat in the roof rack and some bikes hung behind. The roads are tacked, but they are also very wide and there is no problem when crossing with these rolling monsters. It is also curious how to overtake them. The mountain roads have a continuous almost permanent line. But there is no problem to pass the slower vehicles. 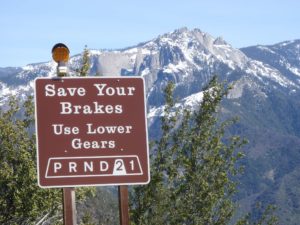 Every so often there are some spaces to the right to move away and some posters that remind the slower vehicles that move aside to let pass. But you do not have to remember it too much: as soon as they see you arrive in the rearview mirror, they quickly move away. I can not imagine anything similar in Spain: we are not used to driving the rear-view mirror to give way. It is a pleasure to drive through North America.

The descent is vertiginous, with strong ramps. Some impressive panoramas accompanied us during the descent. There are signs to indicate that short gears are used in the descent: the pictogram in the signal is that of an automatic gearbox. With the descent the snows were also left behind and the temperature is rising at the same rate at which we lose altitude. A couple of times we have to stop to take off layers of clothes. When we left the Park we had a spring temperature that we did not feel for a couple of days.

Although we had planned to stop soon after leaving the park, the day had been so impressive that it gave us something similar to a rush of the type “gives you alassss “. “Come on, a little while …” “Well, we can still do a little more.” After the restaurant we crossed Three Rivers and finished the twisty and downhill roads. The horizon opened, the speed increased considerably and the kilometers passed fast. We were traveling on Route 198 until we reached 65. Infinite lines. In each town we renewed the intention to stop to sleep in the next. And so over and over again. Lemoncove, Exeter, Lindsay, Strathmore, Porterville, …

The landscape had changed radically. Of rependete, we were in an area of ​​fruit trees, basically oranges, tangerines and lemons. When we arrived at Terra Bella we stopped to buy a bag of mandarins. The sun was already starting to fall and the sensible option was to stay to sleep in that area. Stop. That’s what it played. Stop. How clear it is then from a distance! Instead, we looked at the map and our brains turned. Follow, follow, follow, …

We pass Ducor, we arrive at the intersection with the 155 and we go up again up the mountain trying to reach Lake Isabella. Illusions that we are. At which we started to climb the mountain, again the temperature began to drop drastically. Again, warm up. But it was useless: towards a cold that was peeling. But now there was no where to stop. We were between nowhere and nowhere. Woody were just four houses and there was nothing like a motel. There were still more than thirty miles to Lake Isabella, but the weariness of the long day passed by suddenly and the cold was the worst we had experienced during the trip. You had to stop. But where? When arriving at Linns Valley, a lonely motel was the only option. Of film. But scary movie. Likewise, he knew us to glory. In addition, this would be the cheapest night of the entire trip.