Motorcycle rented by the American West 7

In the depths of Death Valley

The average does not exist in the USA. When we woke up on Tuesday, we saw that it was going to be a very hot day. They explained to us that we were very lucky to have come in March: in summer this happens to be an infernal furnace to which only those who wish to experience extreme heat approach.

Again, the campsites are full of fascinating pots. In addition to all kinds of motorcycles, quads, 4x4s, motorhomes, … there are the trailers. The airstreams had only seen them in the movies. And they are amazing, gleaming and bright. If I could, I would have brought one to Spain: they are so beautiful, so special, …

The day was going to be very long, since there were many things to visit in Death Valley. We started with a dune area near where we had slept. The sun is still very low in the morning, which creates amazing shadow effects playing with the mountains in the background. It would have been a good place for sunset last night. It’s hard not to imagine bouncing off-road motorbikes through the dunes, but these are protected by being inside the park. “Oh, do not worry about that: a few miles from the Park you have all the sand you want,” I am told by some who carry a KTM in the trailer. 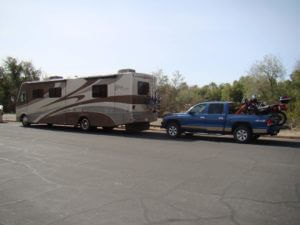 Driving through the park is like being in a movie, with changing and surprising landscapes. A true road-movie. It is a desert, but nothing monotonous. A few dozen miles later, a spectacular salt lake appears. It turns out that decades ago here was an exploitation of borax, the popular name of sodium borate. It is a saline compound that is formed naturally by the evaporation of salt water. Its main utility is related to detergents, soaps, disinfectants and pesticides. Collecting borax in an evaporated salt lake is relatively easy, since it remains on the ground.

But we must remember that we are in a hell of extreme temperatures, far from anywhere. To move the borax were used caravans of 20 mules that had to travel the almost complete Death Valley to reach the railway. Many of the mules died on those extreme trips.

In fact, the hardness of the living conditions and the expensive extraction cost made the borax farms last a few years in these areas. Finally, the facilities were abandoned. Now, they have fixed them a bit by recovering the machines that were used and you can appreciate the hardness of this work. And also the silent beauty of these large white expanses that are not snow. They reflect the sun and multiply the effect of a heat that was already hellish of entry.

We stopped for breakfast and made the entrance payment in the largest of the visitor centers, the Furnace Creek. There was no accommodation available, so we came back to realize how lucky we were We had been the previous night to find a cabin inside the Park, without prior reservation and at Easter.

After Furnace Creek, we left the main road to enter a secondary road that would take us to Badwater, a point almost one hundred meters below the level of the Sea full of salty dry lagoons. The route was very long and the landscape again breathtaking. What we did not expect was the strong wind that would accompany us during the rest of the day. And strong wind in the USA, means a gale that made it very difficult to take the bike in the lane. We were shaking from side to side, and on several occasions he threw us into the other lane. Luckily the traffic was scarce. There was not a reference about the wind.

Not a tree, not a plant, nothing that moved. Except for the force with which it impacted on the bike. The most sensible thing would have been to stop, but where? We were in the middle of nowhere, with more than 100 miles ahead to the next town and nowhere to stop. Also, who said the wind was going to stop? There was only one option: to continue and try to get used to the wind.

With the passing of the miles, the wind was still as strong, but I had already learned to understand it. It was not a gusty and changing wind, which is the worst to go by motorcycle. The wind was very strong, but it always blew in the same direction. We were the ones who circulated on a road that was changing its orientation with respect to the direction of the wind. After a while, I knew when we had to move around “a wind tunnel”, where the curve would hit us at once (the left curves were the worst) and when it played circular with the wind at 45º front (almost windsurfing) on motorcycle). It is seen that everyone gets used to it.

But there were still tremendous blows of wind on the bike. The Harley of almost 400 kilograms is not exactly aerodynamic: the wheels are almost covered, the screen like a windsurfing sail, the suitcases, … And all this combined with a tremendous heat. The wind blew hot air over us.

But in addition to that “anomaly”, the landscape was also worth it. Bleak. Intense. Immense. A valley without end. And we got to Badwater. 282 feet below sea level, impressive thinking. A huge salty dry lake. You could walk for almost a kilometer until you got in the middle of the salt. The wind was strong, and everything that looked around was a huge white surface. It was not snow, but salt. The place I loved: it had a huge energy. Fortunately, there was no visitor center that would tame it. Only salt, wind, energy, desolation, depth, …

We had a good time walking around Badwater. Then, back to the road that was giving us new landscapes. Sometimes dantesque, sometimes surprising, sometimes repeated. Heat and wind. And miles, many miles. Finally, after passing through a port, Salsberry Pass, we arrived at Shonsone (an Indian reservation) that marked the exit of the Park in the middle of the afternoon.

We arrived exhausted by the beating of the heat and the strong wind on a day that had started very early. By a stupid failure of foresight we had left without reserve water from Furnace Creek, already a lot of hours ago. Unforgivable. Although it is always preferable to run out of water than without gasoline. As it was already quite late, we decided not to eat so we could get to Las Vegas before nightfall.

At the exit of Shoshone there were works and the passage was alternative for each direction. The difference with respect to what we are used to was that the traffic through the section of works was done in groups behind a pick-up with sirens that circulated at a very slow pace. “Follow me”. In short, a little excessive the tema.

El stretch to Las Vegas did not have much history, but the truth is that we were long and tired. Highway through the desert. A few miles before arriving, you could see the profile of the city. As we got closer, the lanes grew on our highway and the traffic intensified. But it seemed that instead of approaching us, the highway was going around the city leaving it to the north. 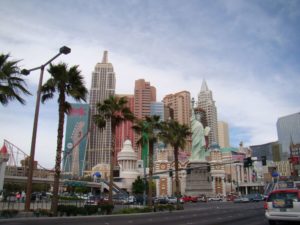 Suddenly, we came across “Las Vegas Boulevard” that pointed to the distance to the city. That was the avenue that was going to take us directly to the main street of Las Vegas, where all the ho famous teles. A few miles later we were greeted by the famous sign that gives entrance to the city: “Welcome to fabulous Las Vegas”.

From that point, the view is divided to the right and left: Egyptian Pyramids, lavish limousines, The Empire State Builing , the Statue of Liberty, the Eiffel Tower, Venice, … It is possible to find anything on this street crowded with vehicles and pedestrians. We circulated very slowly and we discovered Las Vegas hotels that have appeared in so many movies: NewYork-NewYork, Bellagio, MGM, Caesar’s Palace, Hard Rock, Flamingo … and finally the Mirage, where we will stay. To travel the main street we have been more than an hour and it is already beginning to fall in the afternoon.