And again, the Golden Gate 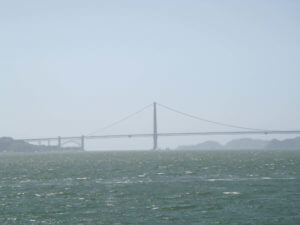 We do not know how it was but the last day has arrived, on Wednesday, April 7, when we will have to return the motorcycle. We will not have a day left over. The last miles we taste them circulating especially slow. Shortly after leaving Monterey, we escaped flying the striped map, stuck and stuck that had accompanied us the entire trip. The bad taste of the loss was sentimental, since we did not need for this final stretch. We had already given up entering San Francisco through the hills as was the initial intention. Another slope that we have left. It only remained to follow the indications to San Francisco, basically the river of the main traffic. The names of the exits remind us that we are crossing the mythical Silicon Valley: Palo Alto, Cupertino, etc. The Bay Area of ​​San Francisco is fantastic.

We went to visit Lombard Street, the steepest street in the world. In order to circulate through it, they made a curious zig-zag design. This street has appeared in numerous films and is one of the most visited points of the city.

The Chinese district of San Francisco is another inescapable place. We are dedicated to find the original factory of the typical cookies with message. And after understanding by signs with a couple of Chinese who did not speak English, we managed to locate ourselves and find the place where they manufactured and packaged them. We loaded with several packages of cookies as an original gift. Later, when packing our bags, we realized the mistake they were making due to the difficulty of taking them to Barcelona without breaking them. Guess where we put part of the bags ?. Inside the helmets … heh, heh ….

In the afternoon we made a getaway to Alcatraz. The famous island in front of the city that was the maximum security prison for a few years. The visit is very good organized and you can get the idea of ​​what it was like to live in Alcatraz. But the greatest cruelty is not the harsh conditions of the prison, but it seems to me that it should be to have the permanent vision of the city of San Francisco from the windows of the jail, as a permanent reminder of the lost freedom. 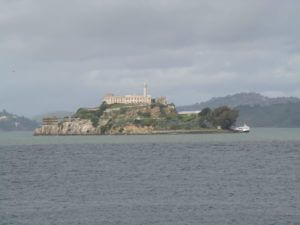 Sorry for the end of the trip, we will return the Harley Davidson to the rental agency. The truth is that the bike has behaved well during the trip. They welcome us with joy and are interested in knowing how the trip has gone. The motorcycle is only given a quick glance and they dedicate themselves to making us spend a pleasant time in the delivery asking about the trip and how we felt the bike. Good people. A fully recommended site. They count the miles traveled: 2,406 miles in 13 days. We are told that the daily average is a higher than usual amount in rentals.

It has been very nice and exciting to relive the trip to share it with all of you. See you on the road!