On a motorbike rented by the North American West 10

Arriving at the Grand Canyon under the snowfall 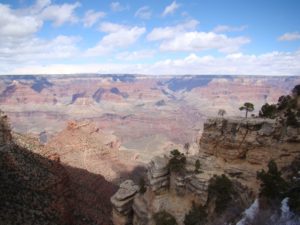 We had gone to sleep with the apprehension of the great snowfall that was expected at night. When we woke up, we opened the door slowly waiting to see a white blanket. But snow, nothing at all. Sun. The day had dawned with the sky clear. We laughed at everything we had suffered the night before, waiting for the great storm.

A coffee and we quickly set off to take advantage of the day at the Grand Canyon. The day was bright and radiant, although a bit cool. Despite the sunny day we were finding threatening “Watch for ice” signs every few miles. Ice?. It seemed like a joke watching the good weather I was doing.

Williams was about 20 miles in continuous climb. As the miles went by, it got colder and we had to stop to put on more clothes. Suddenly, the landscape turned white and we realized that we had sung victory too early: Yes it had snowed during the night. But he had done it a few miles above Seligman. 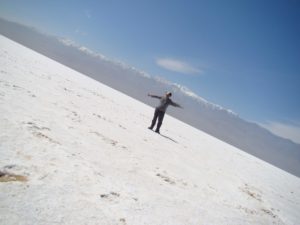 We arrived at Williams dead of cold. All the cars were covered in snow and there were many traces of snow on the sidewalks. As always in the USA, the road was impeccable. We parked in front of a bar, direct to a café con leche and put on all the clothes we had: tremendous onion complex with so many layers of clothes. “Did you come on the motorcycle? How about the snowfall? And the cold? “, They looked at us like Martians. In just a few hours, the temperature had dropped more than 10 degrees.

Fortunately, the road was flat since Grand Canyon is at the same height as Williams. When arriving at the entrance booth of Grand Canyon Park it was snowing slightly. The guards told us that the forecast of snow for the day was 60% and that, despite the sun, it was going to be quite cold.

In spite of everything, we were lucky that it was a bright day, which enhanced the impressive landscapes. I confess that I was tired and tired, and I thought that coming here had been a mistake. All those negative thoughts dissipated upon reaching the first viewpoint. Although I had seen many photos, when I arrived at the first viewpoint I was surprised by the grandeur of the landscape.

The feeling was like being part of a photograph, a set, a screensaver …

The viewpoints on the canyon are located on the south slope of the Grand Canyon and to move between them there is an excellent service with several bus lines that pass very frequently. You can walk at times and get on buses when the distance is a little longer. The National Park is very well organized, like the other Parks we have been on this trip. 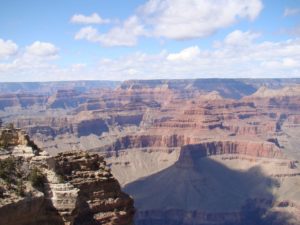 After touring a good number of viewpoints, we decided not to hurry our luck and return before the night fell. The initial intention was to return from the Park by a different road, which goes to Flagstaff. But it was cut by the snow, so for the first time on the trip, we had to take a tour back along the same road.

At dusk, we were back in Williams dead of cold, but satisfied with the visit to the Grand Canyon.

After having spent so much cold we deserved a small tribute. That day I did not touch a motel. In the morning, I had picked up the booklet for a bed – and – breakfast that looked like a nice place. It turned out to be a movie house, all at our disposal. It was like living for a day in a decoration magazine. There was a good collection of movies at our disposal, a billiard, a huge juke-box and a peculiar game that consisted in sliding some pieces along a long platform covered with salt (or something similar), “22 foot-long suffleboard table”. By far, it was the best accommodation in the whole trip, in the day that we needed the most.

I was resting to start the next day, finally, Route 66.