On a motorbike rented by the North American West 2

Picking up the Harley 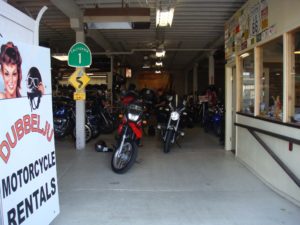 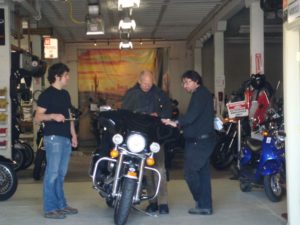 When motorcycle trips are on the other continent, the trip starts by plane. That causes a double stress when preparing a baggage that has to be transported in the hold of the plane first, but then it has to adapt to the space available on the bike. In this case, the two side suitcases of the Harley, the trunk and a tube bag to put on the roof rack on the trunk. 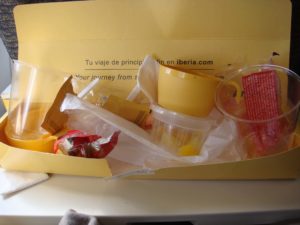 The surprise came when we landed in San Francisco: we were waiting for our suitcase while the empty tape went round and round. And he stopped. Without showing our main suitcase with all the clothes and the motorcycle equipment. At the counter we are reassured that it will arrive on the next flight, so we are confident to the city. San Francisco welcomes us with open arms. Despite the long journey, we still have the desire for a first walk through the center of the city. A friendly and pleasant city, with a calm pace. 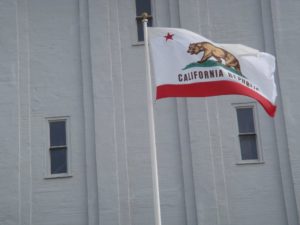 The weather in San Francisco changes very easily. In the morning, it was raining. A couple of hours later the sun was shining. And soon after, the rain threatened again. Climate changes were a constant throughout the time we were in the city. There are many climates in a single city.

We could not resist approaching the rental agency and confirming the Harley’s reservation for the next day. Dubbelju is a small agency with a lot of flavor. There are motorcycles hanging on the walls and photos of travelers who have passed through here, in addition to many attractive motorcycles on the premises. I identify several GS’s, some Goldwing, a beautiful Triumph Thruxton 900 and a few Electra Glide. One of those will be our mount on this trip. We confirm the reservation, we see our motorcycle and we chat for a while with the people of the agency.

Good sensations. I am happy that I did not make a mistake when choosing a small local agency in front of a large rental chain. There was not much difference in price and I thought I could have a more personalized treatment, which is what happened.

The first day in San Francisco had been a contact with the city. It was a nice day. We discovered the area of ​​the port in which we tried the classic crab soup, we saw the sea lions in the pier 39 and we walked it all on foot. We also went to see the trams and discovered the hills that make up the city. The first sensations showed me a city that was already known (the effect of cinema …) and to which I will certainly return in the future. Something similar to what I felt on my first trip to New York. 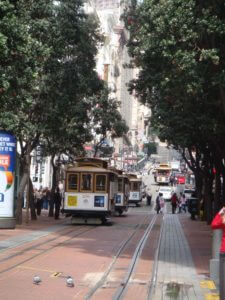 The next day we went to pick up the bike to start the trip. We present ourselves at the agency to pick up the bike practically with the clothes and the helmets. There were a couple of couples who were picking up two beautiful BMW GS’s: one 1200 and one 800. Equipped to the max, they were doing the final touches to the loads on the bikes. My eyes were gone. We were waiting for a practically new black Harley Electra Glide that was going to be our companion in the following days. 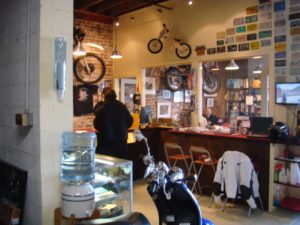 Wolfgang (the director and founder of the Agency) asks us about our motorcycle experience, our trips, our plan, … Close and affable, it’s a pleasure to chat with him. When talking about our travel plans, display a map on the counter and with a highlighter phosphorito is marking and commenting on the route to follow. You can see that he knows him well and transmits great security. “A great trip!” encourages us “GPS? As you want … but it is not necessary. A map is funnier!”. So it was. The map marked by Wolfgang was our good guide for the American West.

The collection was very fast. Wolfgang explains four details of the Electra Glide and “you can start your travel! …”. Logically, it is not a sporty or a motorcycle too manageable. It’s about 400 kilograms that you have to move.

Once we picked up the motorcycle, we walked with the Harley for a while in San Francisco and we gave away a good meal. Then, return to the hotel to organize the luggage and start the motorcycle trip to where we arrived that day.

On a motorbike rented by the North American West (3): Going by motorbike from San Francisco 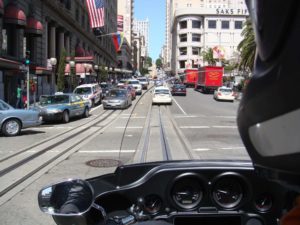 The first kilometers are made through the city. Traveling quietly through the city with the freedom to do it on a motorcycle. We went to see the Golden Gate and discover some neighborhoods further away from the center. The first few times I have to stop and start on the steep streets of the city impress a little, but in a short time I get used to it.

The first surprise was literally going up the highway to leave the city: so this was where all the traffic was. A lot of lanes and intense traffic. We headed towards the Bay Bridge to leave the city across the bay. There are five lanes in each direction, located one above the other. The exit is the one below. Traffic has a constant speed, practically e in the allowed limit. Impossible to stand on the bridge to take photos.

After the bridge, a complicated moment came when we had to hit the numerous highway junctions that we are encountering. If we were wrong in any of these crosses, turning around would not be easy. But fortunately, we are going with the right direction. Driving on these constant speed highways and a lot of lanes makes me tense, because I’m not used to it. More than an hour after leaving, we were still at crossroads and more motorway junctions, and always with heavy traffic. The few bikes that we are seeing circulate properly through the lanes even in the retentions and within the limits of speed. 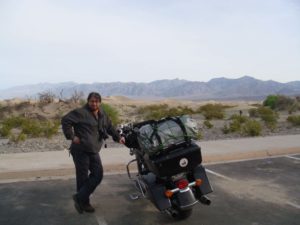 At the first stop, we find a curious Honda Goldwing three-wheeler. I thought about who would want to take that invention. But immediately I had to swallow my words when getting off the bike a person limping ostensibly. We talked for a while with him, who turned out to be a veteran of the Vietnam War (he wore a conspicuous patch on his jacket). The whole was curious and picturesque. A few kilometers ahead, the highways end and a two-way highway begins. And that’s where we got the wrong road when crossing a city. When it seemed easier to follow the right course. Although the orientation to the east was good (the sun that was already setting, never lies) we did not hit the road we were looking for. We are circulating along a secondary road of infinite lines. To the right and left we were seeing the entrance of huge ranches every so often. But there was no one on the road and no reference to cities or kilometers (well, miles)