On a motorbike rented by the North American West 8

Las vegas, a city of papier-mâché 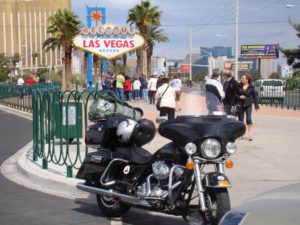 With the motorcycle parked and a good shower to remove the miles of us, we went to dinner and walk around the city. On a motorcycle everything seemed relatively close, but at the distances are enormous. Each hotel is really big. All have their shopping center and the corresponding casino on the ground floor of the hotel, as well as lavish gardens, lakes and parking lots. As expected, a lot of neon and announcements of renowned shows.

There are rivers of people on the street who seem to have a good time. In fact, they seem to have an obligation to have fun. They are on vacation. Las Vegas is an authentic temple of consumerism. Everything is made of papier-mâché and is aimed at spending and spending. Endless slot machine rooms. Men-advertisement offering women on the street. Everything in this city is artificial, smells fake. 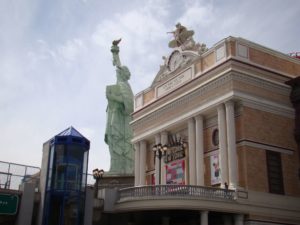 I honestly did not like Las Vegas. Nothing. Coming from the impressive North American National Parks, Las Vegas seemed somewhat smaller. Empty. Insulse Decadent. It did not contribute anything to me. I do not intend to turn a travel chronicle into a sociological analysis, so I will not elaborate on the subject. Anyway, if I ever get lost I’m sure you will not find me in Las Vegas.

One of the things that impressed me was the lighting of some interior spaces that seemed to have natural daylight. On the Venetian canals (with gondoliers, bridges and Piazza San Marcos included) it seemed like we were in the middle of the afternoon. Actually, it was late night a few hours ago, but it seemed like a late afternoon. Tremendous confusion between day and night. Las Vegas has no time schedule and the activity never stops.

Among the slot machines I was surprised to find some bikes. In one of the casinos, you could see BMW’s on the slots, in a curious place for the promotion of motorcycles.

More curious was a custom creation that was in another of the casinos: “The sirens of Treasure Island”. A spectacular motorcycle, although I can hardly imagine that it is capable of traveling on the street. Not bad as a sculpture to put in the dining room, but I have always thought that the bikes are to be used.

One of the anecdotes of the night happened to us in the street. I had finished shooting and the main actor was patiently signing autographs and taking pictures with a group of fans. We asked some of the girls who had an autograph in hand who was the actor: “Oh, we do not know … but I’m sure he’s someone famous.” “I do not know who he is either, but I’ll look for him on the internet,” another girl who had taken a picture with him told us. And there the poor actor was struggling to please some fans who did not know him.

Upon entering Las Vegas, the Harley Café had already caught our attention. We returned in the morning to see it in detail. It is a great theme restaurant around the world Harley. The place is full of motorcycles and photos. Many of the bikes flew literally around the place, attached to chains and circling. In addition, there were all kinds of personalized Harleys (with more or less taste) distributed by the local. On one side you can see a beautiful exhibition with all the engines of the Harley Davidson story. 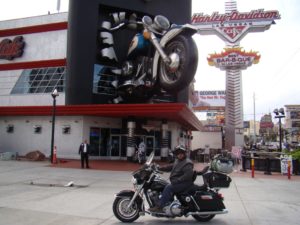 But the geek was on the second floor: a chapel to marry between Harleys and be able to celebrate right there. “The Chopper Chapel”. The photo album of the celebrations that were in the chapel was not wasted, with Elvis of all colors accompanying weddings on the bikes. We took a decorative bouquet from the chapel and took some quick photos before leaving Las Vegas.

We had less than 24 hours in Las Vegas without moving the motorcycle. But the truth is that it was more than enough.