When designing the Pautravelmoto rental range, we needed a motorcycle that complemented the Honda Africa Twin. The Africa Twin is a high and powerful motorcycle that many people respect. Therefore, we must have a more friendly and less intimidating alternative to rent. We were pleased to keep starting at the Honda range, so we looked at the Honda CB500X.

I confess that it was a bike that I had not paid much attention before, but when I started explaining to friends and future customers that we were going to incorporate the CB500X into the rental range, we realized that it was a motorcycle from which everyone said positive things. Nobody spoke ill of this small trail of scarcely 50 horses. Someone came to call him “the matagigantes”.

When the first unit arrived, I thought it was a well-built bike, with contained dimensions, no frills in the finishes of the cycle and beautiful parts. From the outset, I thought we had made the right decision with the CB500X as a complementary motorcycle for the Africa Twin for rentals. But you had to try it. So taking advantage of the fact that we had to shoot the new bikes, we took them to the Pyrenees. I can not think of a better place to shoot some motorcycles than the Pyrenean ports. We take an Africa Twin and the CB500X. 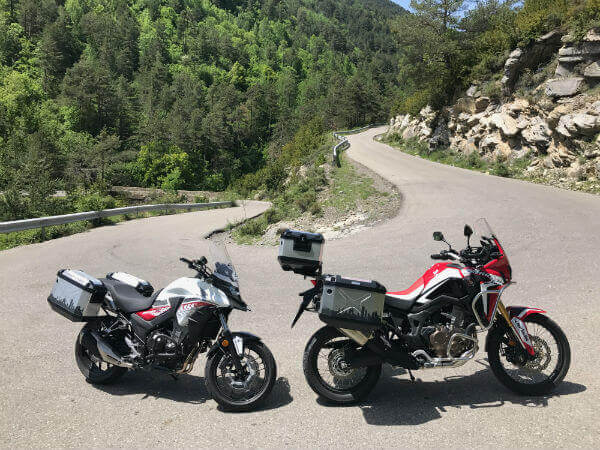 After a weekend doing miles, I declare surprised and in love with the CB500X. It has enough power, the cuentavueltas comes up with joy, is fun to wear, light, manageable and spends little. In the twisted Pyrenean ports, he followed with dignity the rhythm of the Africa Twin and revealed himself as a motorcycle suitable for traveling to the end of the world. It is not always necessary “big horse”. Obviously, the suspensions are not the same as the Africa Twin and transmit more clearly the irregularities of the asphalt, but they do well with their mission.

The second surprise has come with the first motorcycle rental reservations. The Honda CB500X has been the star of the reserves in these first days of operation. It is a logical motorcycle that fulfills its purpose in an excellent way, and it is clear that people know how to appreciate that.

The Honda CB500X, a real matagigantes.